Los Angeles, 1948. Beneath the sweeping searchlights of Hollywood, a darkness grows. Monsters in human guise are lurking in the City of Angels to unknown purpose. In The Big Dark, private detective Henry Shaw has a knack for finding these monsters . . . and eliminating them. This puts him at odds with his former partner, Bob Neville, tasked by the LAPD with keeping the existence of these creatures secret from the public. On top of that, a disturbing new case is pushing Shaw to his limits. In Meet John Doe, the monster problem escalates as Neville is pulled into the case of a volunteer caregiver who had an emotional encounter with one of the creatures. While she recounts their cross-country chase, Neville wonders if some of the so-called monsters, despite frightening and deadly behavior, might not be so monstrous after all . . .

Scott Pearson and William Leisner met after both becoming published Star Trek writers in the Strange New Worlds anthologies from Simon & Schuster. Since then, they have both published additional Star Trek stories and novels as well other short stories in small press anthologies across a variety of genres. Now they're working together on Tales of the Weird World War, an alt-timeline mashup of genres and period pieces, starting with the 1940s noir/horror/sci-fi novellas The Big Dark & Meet John Doe. They've just begun work on their next stories, set in the mid-1950s, as more characters encounter the mysterious shapeshifting creatures and the authorities are working harder to keep the public in the dark.

Available in print from Amazon and in e-book form for the Kindle, Nook, Kobo, and Apple Books. 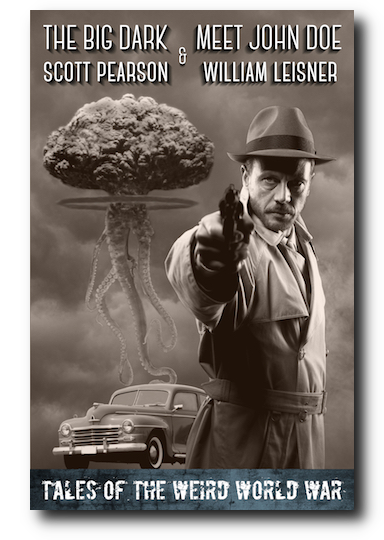 Return to “Authors: Tell us about your FICTION book!”

As an Amazon Associate BookTalk.org earns from qualifying purchases.